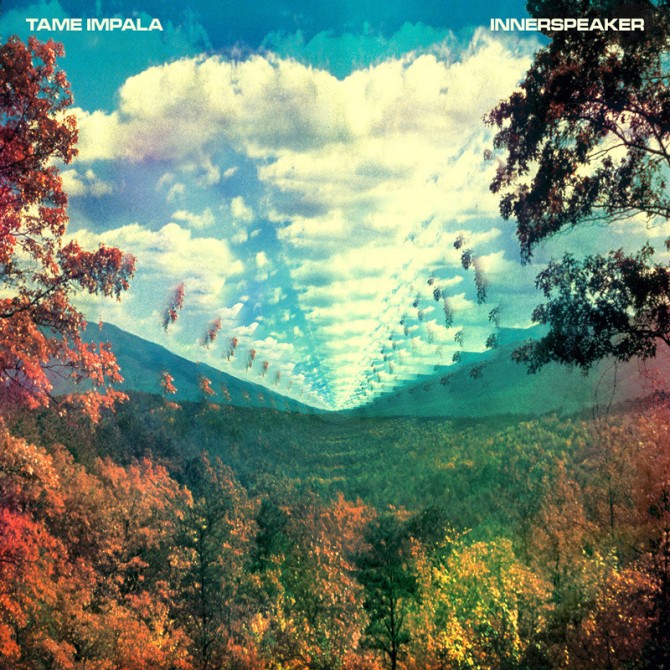 There’s a fine line between science fiction and fantasy. While I hold dear the “hard sci-fi” of Arthur C. Clarke, the wizards and dragons of J.K. Rowling just seem to piss me off. Personally, the same can be said of the admittedly subtle difference between shoegaze and psychedelic rock.

But I always have exceptions to my nonsensical opinions — and for me the psychedelic exception is Australia’s Tame Impala.

You can’t go anywhere without hearing a track off 2012’s Lonerism these days (they’ll be touring the U.S. in November), but I’m going to focus on their debut full-length. From opener “It Is Not Meant to Be,” Innerspeaker has just the right balance of textures and guitar hooks to keep me engaged. And frankly, it’s just a much more compelling album cover.

Leif Podhajsky designed much of Tame Impala’s catalog and materials, sticking with a consistent typeface throughout. Podhajsky utilizes a Droste effect on Innerspeaker to give you an enticing visual of an organic, multidimensional stereo field before anything ever hits your ears.

Tame Impala’s typeface is Eurostile Bold Extended or essentially Microgramma, the uppercase-only predecessor to Eurostile. Both designed by Aldo Novarese and Alessandro Butti, the two Italians birthed Microgramma in 1952 (in an effort to improve Morris Fuller Benton’s Bank Gothic) and developed the more complete Eurostile about ten years later. (See also: Eurostile Next.)

Much like Tame Impala’s “Elephant” on your local airwaves, Eurostile and Microgramma are ubiquitous in science fiction. From Kubrick’s 2001: A Space Odyssey to the Casio logo, they became the default lettering for technology and space exploration in the ’60s and ’70s. (Note that Bank Gothic also has sci-fi appeal, having been used in the TV series Battlestar Galactica, Stargate SG-1 and many more.)

Despite its potential overuse (see Radiohead’s OK Computer and The Bends), the font seems very appropriate on Innerspeaker. It simultaneously evokes a retro past and an unforeseen future — just like the music itself.