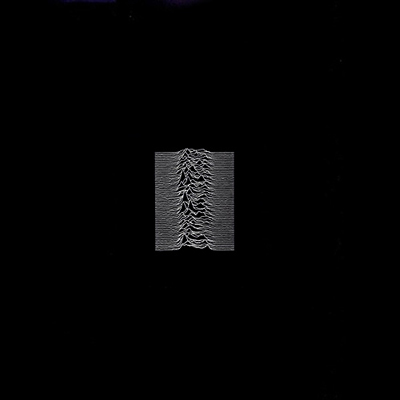 The way I see it, you may as well get the icons out of the way right at the beginning. And this album is chock full of icons. From Peter Saville‘s minimalist package design to the frontman Ian Curtis’ enigmatic presence, Joy Division’s debut album Unknown Pleasures pretty much has it going on. And let’s face it, is there anything cooler than the white illustration on the front? Take that, mix in the single “Love Will Tear Us Apart,” and the whole thing kind of exists in a haze of unapproachable cool.

From a typographer’s point of view, there really isn’t much to say. The first edition vinyl of Unknown Pleasures barely had any text on it anywhere. Fittingly, the text it did have, at least in the UK, was all set in Helvetica. Apparently, when the album came out in the US, the text was set in Univers. As to why, I have no idea. I know it’s common to market albums differently in each country and then there are the usual moral controversies (re: the Beatles Yesterday and Today), but Univers instead of Helvetica? My guess is the printer didn’t have Helvetica and figured, “eh, what’s the difference really?” To which I would say, yeah, they’re close cousins, for sure. Helvetica and Univers are both based on the 1898 typeface Akzidenz Grotesk (created by the H. Berthold A.G. type foundry) and both were released in 1957 along with the other close cousin, Folio. Here’s a handy comparison chart, for the complete nerds among us. I’m still partial to Helvetica, but whatever.

As for Joy Division, the tragic death of Ian Curtis a little over a year later would ensure their place in rock history and effectively end the band. The remaining three members, of course, would go on to form New Order and Peter Saville would go on to design perfectly minimalist album sleeves for them.﻿