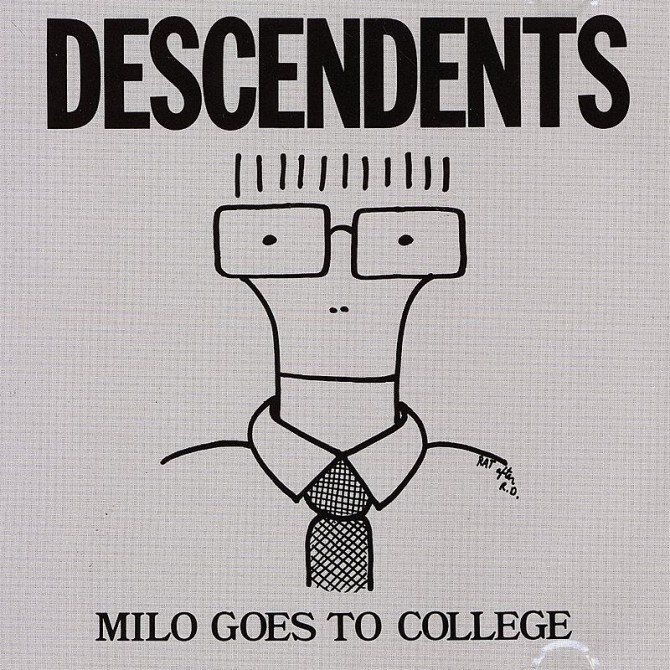 This 1982 debut album from the Descendents sticks in my memory like few others, mostly because it pretty much made it cool to be a nerd. It’s now common knowledge of course that the album title and cover refers to singer Milo Aukerman’s departure from the band to study biology at the University of California, San Diego (later receiving a Ph.D. in biochemistry from the University of Wisconsin, Madison).

With a clean and simple look reflecting the DIY ethos of the era, the illustration of Milo by classmate Jeff Atkinson quickly became an icon of punk culture and was re-interpreted by other artists on almost every future Descendents record (not to mention the many fan tattoos). And just as with this iconic image, “Descendents” continued to be set in Franklin Gothic Extra Condensed for a nice continuity to the band’s visual identity. Originally by Morris Fuller Benton in 1902, this version is likely from the ITC family that Victor Caruso drew in 1980.

The “Milo Goes to College” text is set in a variant of Century Old Style Bold, originally from Linn Boyd Benton in 1894 (but updated between 1908 and 1909 by his son Morris Fuller Benton). This font is a renovation of Miller & Richard Oldstyle by Scottish punchcutter Alexander Phemister, who was active in the revival of oldstyle designs at the Miller & Richard foundry in the 1850s. From Wikipedia:

Old style or humanist typefaces date back to 1465, and are characterized by a diagonal stress (the thinnest parts of letters are at an angle rather than at the top and bottom), subtle differences between thick and thin lines (low line contrast), and excellent readability. Old style typefaces are reminiscent of the humanist calligraphy from which their forms were derived. An old style font normally has a left-inclining curve axis with weight stress at about 8 and 2 o’clock; serifs are almost always bracketed; head serifs are often angled.

As evident by another recent post, Franklin Gothic may turn out to be one of the most widely-used punk fonts of the 80s. We’ll just have to wait and see on that one.