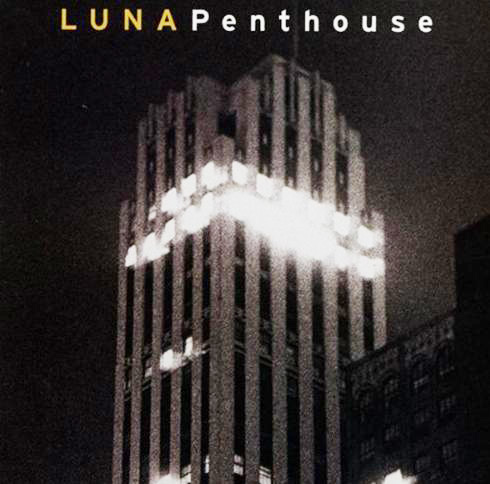 Dean Wareham, the frontman for Luna, spent well over a decade perfecting his craft before he recorded the dream pop masterpiece Penthouse. A New-Zealand-born New Yorker, Wareham began his career in earnest with the seminal Galaxie 500, a three-piece that predated and prefigured the shoegaze movement. But Wareham had ambitions beyond their modest, but enviable, success. Luna was his next project and three records in, he and his bandmates hit creative gold with their paean to New York and moody nightlife, though not much gold apparently in the way of record sales. Regardless, it was a critical success and Rolling Stone put it in their top 100 albums of the 90s.

The cover design was a great fit for the music, minimal and restrained, with an air of somber sophistication. Ted Croner‘s iconic photos of New York City at night were used throughout. Fittingly, the New York-based designer Frank Olinsky was tapped to create the album packaging. No newcomer to sleeve design, Olinsky had been a mainstay in the industry for years by the time Luna were hitting their stride. Olinsky’s career had taken off when he was a part of the team who designed the MTV logo and had continued to work for bands like the Talking Heads, 10,000 Maniacs, Sonic Youth and Smashing Pumpkins. We had the pleasure to speak with Frank about the Luna album design. While we were at it, we figured we’d ask him about working with his heroes, designing for diverse clients and creating the MTV logo.

I’m a ridiculous fan of Luna, just to get that out of the way. How did you start working with them?

I love Luna too. They are one of my very favorite bands ever. I feel fortunate to have worked with them and with Dean Wareham & Britta Philips after Luna disbanded. I was a fan first. Someone at Elektra Entertainment (Luna’s label) gave me a copy of Bewitched and I fell in love at first listen. It turned out that Luna had the same management as the Talking Heads, and I knew one of their managers from working with her on the Talking Heads’ art book project. She invited me to design the package for Luna’s 1995 album, Penthouse.

How did the packaging come together and what font did you use?

Dean had discovered Ted Croner’s magical photos of New York City and knew they were just right for the package. Three pictures were used: the cover photo of the lit-up skyscraper, a group of light-streaked high-rise buildings, and a blurry speeding taxi. (This same taxi photo appeared on the cover of Bob Dylan’s 2006 album, Modern Times.) I hired Nitin Vadukul, one of my all-time favorite photographers, to shoot the grainy black-and-white panoramic portrait of the band. Everything came together just right. That was the first time I used Interstate, but certainly not the last time I used this font!

How did you get into music packaging design?

When I was a kid I wanted to be a rock musician. I figured that the closest I would ever get was designing album covers. I went to art school, and graduated with a degree in fine art. One thing led to another. I did some illustration, learned typesetting, paste-up and basic graphic design. In 1979, two friends and I started Manhattan Design. We went on to create the MTV logo and that led to jobs in the music industry. After Manhattan Design dissolved in 1991, I continued to design music packaging.

What were some early influences on your work? Did you ever get to work with any of your heroes?

When I was growing up in the ’60s and ’70s everything was an influence, especially the music. I couldn’t wait to find out what the next Beatles and Stones albums were going to sound like, and—just as importantly to me—look like. Then came the phenomenal work of Hipgnosis. The images they came up with for albums by Pink Floyd, Led Zeppelin and others just blew my mind.

The musicians I have worked with are my real heroes—at least some of them. David Bowie and Brian Eno, Natalie Merchant. And a few who weren’t my heroes before I worked with them, but whom I ended up respecting enormously, like Henry Rollins, Sonic Youth, Smashing Pumpkins, Kronos Quartet, Dean Wareham, Jimmy Dale Gilmore and So Percussion. Working with David Byrne and the other Talking Heads and all those visual artists on “What The Songs Look Like: Contemporary Artists Interpret Talking Heads Songs” was amazing. I look back at the art in that book, and I can’t believe it really happened.

You’ve worked in such a broad diversity of styles. You’ve done work like Luna’s Penthouse and Smashing Pumpkins’ Mellon Collie and the Infinite Sadness, but then you’ve art designed / art-directed for Sonic Youth albums. Very, very different work there. How do you approach each project?

I try my best to be as open minded and receptive as I can be, and to make myself as invisible in the process as possible. Ideally, I temporarily become part of the band without them knowing it. Listening is the most important thing. Being a fan can help, but that can also lead to disappointment. I try to let the music guide me visually in finding the right artist or photographer to create the perfect image for the album. The best results often occur when a window is left open for surprises and happy accidents.

You just mentioned that you and your studio designed the MTV logo, one of the most immediately recognizable typographic logos in the entertainment industry. How did you approach the creative process on that design?

My studio, Manhattan Design, was in a very tiny room in Greenwich Village. Although this design studio had a very established-sounding name it was kind of a joke. My partners and I, Pat Gorman and Patti Rogoff, chose the name to fool potential clients into thinking we had been around for a while. We didn’t have much experience or money, but we made up for it with spirit and creativity. We weren’t famous and we didn’t know anyone famous, but somehow we managed to earn a living.

A friend of mine from early childhood, Fred Seibert, called me about a project. He was working for a big corporation that was planning a 24-hour music cable television station. He said they didn’t know what they would be showing but they were going to have to fill 24 hours, 7 days a week with it. In those days there weren’t any rock videos; it was all mostly short performance films. Fred said they needed a logo for the station. He said that some established designers had already been hired but he had squeezed some additional money out of the corporation to give us a shot. We began doing many sketches—lots and lots of them. The earliest ideas featured musical notes and other obvious symbols. Those were all quickly dismissed.

At some point an outline drawing of a bold, sans serif “M” appeared on a piece of paper. One of us then drew dimensional sides to the “M”. After that, a variety of groupings of the letters “TV” were added. Everything seemed too normal looking. I thought the logo needed to be less corporate somehow—defaced or graffiti-ed. I took an enlarged copy of the fat “M” drawing and went into our studio’s narrow stairwell with a piece of acetate and a can of black spray paint, and—voila—the MTV log pretty much as it appears today. The three of us then played around with scale and proportion, and after some tweaking the sketches were sent up to Fred. He presented them to suits. We never attended these meetings so I don’t know what really went on, but the story is that sketches actually ended up in a wastebasket several times and were then fished out.

The next, and probably most revolutionary part of the design came about when we were asked to come up with “corporate colors” for the logo. The decision was made that there wouldn’t be any. Knowing that many people were going to be working with the logo made us think that just like rock music, the logo should always be changing—the “M” and the “TV” could be any color or pattern. The concept of a chameleon-like logo was brand new.

The rest is history. Sometimes I think about those days and it seems like another lifetime.

That’s pretty amazing. What’s next for you? What’s on the horizon?

A summer vacation in Nova Scotia. The Atlantic Ocean is on the horizon.